I got an email early this morning (see below). It links to a very insulting tweet about me, and contains a photo of me stolen from my twitter account, and re-posted without my permission. 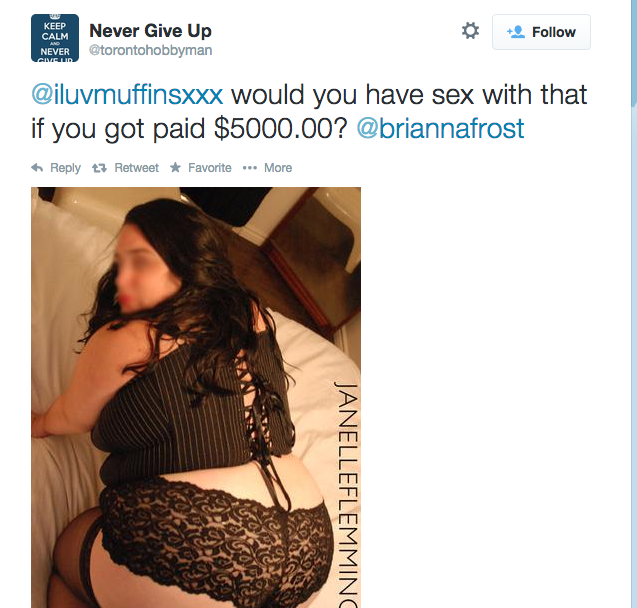 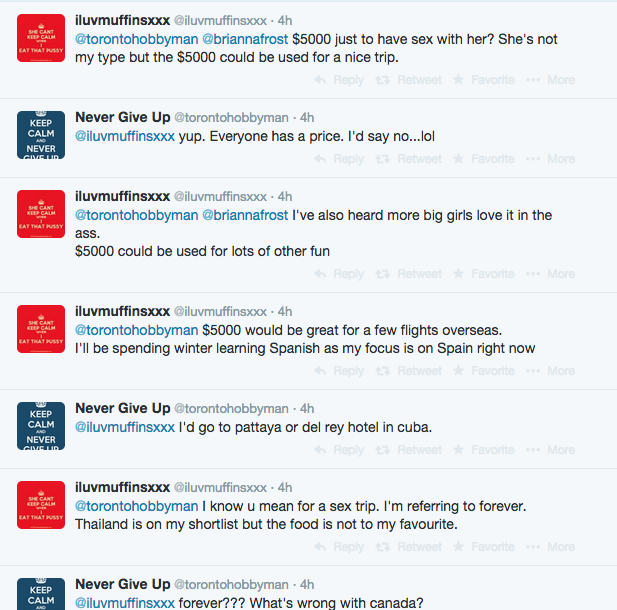 I opened this link literally 2 minutes before my client arrived. At first I was like "oh. that's really mean" but I put it out of my mind as my client was here, and undivided attention is part of the service I offer. We had our fun together, kissed, laughed, fucked and sucked each other, came really hard together, and he was gone in under 30 minutes. A stack of 20's on the table, and my own self overjoyed with the prospect of paying not only my phone bill, but having enough left over for some winter boots and maybe even some new clothes! Fabulous.

Then I came back to check my email and remembered, oh yeah, some wanker on twitter sent out an abusive tweet about me and posted my picture without permission - and of course, he was too cowardly to say it directly to me.

I'm a fat woman. I'm also a sex worker. Being degraded, insulted, mocked, called names, de-valued, and treated with utter contempt and disrespect is nothing new to me (and no, it's NOT my clients who do this). I've been dealing with it, literally, since I was 4 years old (I've always been large). When I first started doing sex work, there were a few scattered negative comments about me, mostly on TERB (or TURD as most sex workers I know call it), always about my body or looks (I've yet to see a negative comment or review about my service). I avoid that site entirely, have found clients easily without it, and have a decent list of long-term regulars with whom I have wonderful relationships.

So seeing a hateful tweet like the one above didn't surprise me. My first thought was "hmmm. Maybe 'torontohobbyman' is pissed because I didn't follow him back last year?" My second thought was "wow. I am SO LUCKY that I am a fat woman. If I was not a fat woman, if I fit the very narrow mold into which he pours his beauty standard, I might end up spending time with a client like that".

Now, I know I've spent time with judgmental men who are ashamed of their attraction to fat women, and that's ok. Part of the beauty of this work is that I get to exploit fat-phobia, and male shame about being into fat chicks. I enjoy that. Obviously, guys who wouldn't proudly be with someone who looks like me would never get to be with me outside of a business context. But the thought of spending time with someone like this guy, who is clearly super insecure with himself, who probably hates himself, and who certainly hates women (because men who love women don't degrade them - even the ones they don't want to fuck), made me shudder. I feel bad for the escorts on the receiving end of his "flirtatious" (see: creepy) tweets, and I frowned imagining what kind of client he must be. I'm thankful that I'll never have to know. (My guess: picky, demanding, boring, and super entitled. Probably also a lingerer. But, this is purely speculation.) Being ashamed is one thing. It takes a special kind of hatred of fat women specifically, but of women in general, to engage in this sort of demeaning behaviour.

"Nobody Hates You More Than Your Reflection" - Atmosphere
There is nothing wrong with paying for sex, and people do it for all sorts of reasons. One of those reasons is that folks are unable, either due to their looks, hygiene, social skills, body type (those narrow societal standards, again), latent misogyny, or on account of a shitty personality, to "get" the kinds of women (or men) they find most attractive to sleep with them, which I suspect is this particular client's reason. Because who else, other than someone who hates their own reflection, and women in general (because of the many who've rejected them), spends their time trolling for pictures of women online they deem undesirable, only to post their photos, without permission, simply to degrade and abuse them? Who else, other than the saddest, most insecure of individuals, has to seek out others, who've never even interacted with them, just to insult, mock, and name-call them on twitter? And who but an equally sad, hateful, and unloved individual informs you of said insults, only to insult you more, while simultaneously trying to fake-book an appointment?

I recognize his hatred. I grew up, and still live, as someone deemed undesirable, and I used to be somewhat like this guy: judging the fuck out of everyone around me in a vain, counterintuitive (and unsuccessful) attempt to feel better about myself. It was always fuelled by jealousy, self-hatred, low self-esteem, and/or longing to simply be loved, accepted, and desired. It seems to me that those who so often target folks like me, ARE folks like me, (or like who I USED to be) who've had to deal with bullies, name-calling, and ample rejection. I recognize his hurt, masked as annoyance or superiority, over "undesirables" like fat women. I never went quite so far, at least not as an adult, to seek out others I found gross or joke-worthy just to mock their looks or bodies, but I have mocked people's appearances when I had the chance.

Hurt People Hurt People
And you know what I've learned? Hurting others - because ultimately, I think that's his goal, and the goal of every basic creature who feels compelled to spew hatred at strangers for not looking a way they deem acceptable - never, ever made me feel better for more than a few minutes. And I won't lie, seeing my picture - a picture which I love - splashed on the internet, and reading that people wouldn't have sex with me for $5,000, or any of the other ways people love to degrade women like me, can be hurtful. If I was having a bad day, I may have even cried. But it's not new. It's nothing I haven't heard a million other times, in a million other ways, from a million other irrelevant, lost souls. It mostly just saddens me that human beings feel the need to be so unendingly cruel to each other.

Hurt people hurt people. I know who you are, hobbyman et al. I've met you before. In my mirror, and in the world, countless times. If your goal was to hurt my feelings, or remind me, for the millionth time, that other so-called humans see nothing wrong with mocking someone based on their size or looks, mission accomplished. I was bothered until after the first paragraph or so, and those reminders are a constant part of my daily life. If your goal was to shake my confidence, put me "in my place", deter potential clients, make me hate or doubt myself, or make me feel worthless, I'm happy to report: MISSION FAILED.

If your goal in insulting me was simply to look cool for your judgmental, fat-hating buddies, feel better about yourself, or soothe your clearly sad, troubled heart, make escorts think you're a desirable client, or feel less pathetic, then I hope you succeeded. But I know you didn't. 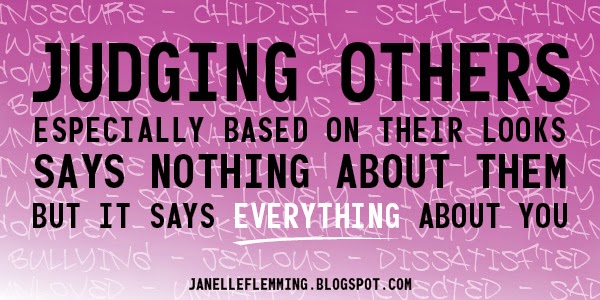 At the end of the day, you're the one actively seeking me, and other fat (or otherwise derision-worthy) women out, just to have a few laughs at our expense. You're the one paying countless women to sleep with you (a wonderful endeavour on its own - don't get me wrong - paid sex is amazing), women who, I can almost guarantee, would have nothing to do with you otherwise, because you're mean, and a bully, and your hatred for women is obvious. The women you desire can see that as easily as I can, and I promise you, some of them are completely offended by it. You're the one sitting at your computer for hours, looking for people to make fun of. Who does that?

At the end of the day, I treat myself, and others who've caused me no harm, with kindness, love, and respect. I have a table full of friends, laughter, warmth, and joy. I've created beautiful art, woven perfect words together, and just had hot sex with a ridiculously handsome man, for which I was very well paid. I possess goodness, talents, and the ability to inspire others. At the end of the day, I LOVE MYSELF and the countless amazing people I'm blessed to know. I don't need to cut others down, even when I feel jealous, insecure, or bad about myself.

At the end of the day, I am still awesome, and insignificant people like you will never take that away from me.
Posted by janelleflemming at 11:23