I try to keep this blog sexy, but this is too important to gloss over. Plus, sex workers' rights, and the rights of clients to consensually hire us, are VERY sexy! This needs to be said, and shared, and spoken about. This horror show, AKA Bill C-36, which is supposedly meant to "help" sex workers (though we're consistently referred to as "prostitutes" or "prostituted women" in proceedings), in which so few current sex workers were even consulted (and none of us were taken seriously by the majority of the government), and which we've been SCREAMING is going to put ALL of us in more danger, is most likely going to pass next week, and it's going to be YEARS before it can be challenged again.

I'm sitting at my computer, tears running down my face, listening to Police Association President Stamatakis "testify" about how wonderful and helpful bill #c-36 will be to police who want to arrest "men who want to do abhorrent things" to "especially the most marginalized women" in society. And on the surface, it sounds OK, if you're someone who doesn't bristle at whore-phobic phrases like "none of us want our children growing up to be prostitutes", "no woman chooses this kind of life for herself" or "all sex work is violence against women" (all of which were actually said by abolition groups, senators, and police during these proceedings, repeatedly). If you're thinking those are reasonable statements, you're blind to the stigma and stereotypes surrounding sex work.

People who haven't been following these proceedings, who aren't involved in sex work, who don't have friends who've been arrested for doing VALID work they either consensually chose (and in a lot of cases, as mine, genuinely enjoy) or who turned to it as a last resort (or any of the million other reasons people choose sex work), who don't know anyone who's lost their housing, their children, their day jobs, THEIR LIVES, all because they accepted money for sex or a sexual service,

may not understand why I'm crying. They may not understand the unique fear inherent to sex work: of being outed, of being rejected by a potential mate or landlord or employer, of being disowned, of being thought of as dirty and diseased and damaged, of being attacked (physically, online, verbally, sexually), or of everything I've outlined above and below, simply due to their profession. Friends of mine who've cried during their testimony were attacked online by so-called "feminists", accused of shedding "crocodile tears", supposedly in manipulative attempts to garner sympathy (as though constantly regaling us with sad stories of past exploitation, addiction, abusive relationships and exploitative working conditions can't be placed in the same category, if one is being cynical). People who are only observing this, and who don't have friends, family, partners, lovers, children, or anyone else they love being impacted by this may not understand my tears, my rage, or my sense of utter hopelessness.

I am not alone in feeling this way. I'm blessed to be connected (in numerous ways) to a large community of sex workers, from Dommes, cam girls, escorts, porn actors, and sugar babies (and beyond). People who have saved my life, uplifted me, prioritized me and other workers, and whose resilience, brilliance, and strength seems boundless. People who, at first, I was shocked to discover were "just normal people like me". As far as I can tell, at least based on those I've been in contact with (in addition to the chorus of voices online, including those "marginalized women" politicians are so keen on "saving"), we are ALL (to varying degrees) feeling down, afraid, hated, depressed, vulnerable, isolated, ANGRY, and very much against C36. It's especially troubling after what so many of us (myself excluded) felt was the great victory of Bedford V. Canada.

Try to imagine for a moment that your work (whatever work it is you do) was surrounded by societal shame, even if the work you do provides a pleasurable, valuable, and often healing experience for others. Imagine your job is selling sandwiches, but purchasing sandwiches is illegal. Imagine if, while on the job, you faced violence/rape/coercion/threats or any sort of abuse or exploitation, and, because of the shame, stigma, and criminalization of your work, you felt too afraid to ask police for help, because you know, based on their track record, that you will, at best, be ignored, and at worst re-victimized/arrested. Imagine if you DID seek the help of police, based on their constant public proclamations of being "on your side", and instead of your abuser facing justice (a very inaccurate term to describe the racist, classist Canadian system), you wind up being arrested, having your earnings seized, being evicted, losing custody of your children, being deported/losing your immigration status, and being told your only options are a criminal record, or a program to "rehabilitate" you, even though there is nothing wrong with you or your line of work. Imagine the police sitting outside of your work place, in full view of your neighbours, in the hopes of catching you doing something that both you and your client have fully consented to, and which is harming or impacting no one? Supporters of C36 will argue that workers themselves won't be targeted, but the sections pertaining to communicating in public, keeping a bawdy house, advertising, living off the avails, and even criminalizing the purchase of sex will mean that sex workers who want to find and service clients will be facilitating or participating in criminal acts.

But almost always, sex workers provide a service which has never been illegal in Canada, which has been around longer than agriculture, and which usually involves an act that is perfectly legal when a camera is rolling, or when offered in exchange for dinner, trips, and shopping sprees, or when performed for free, and which is often (and traditionally) the basis for marriage. If someone is being forced to engage in sex acts, against their will, that is called rape, NOT sex work or prostitution, and we already have laws, which go largely unenforced, against that. I constantly see politicians, police, "sex work survivors" and "women's rescue centres" confusing and deliberately conflating the two, when they're not the same. You wouldn't compare rape to sex, would you? If you would, you lack a fundamental understanding of both sex and rape.

If you've never done sex work, and you're basing what you think you know on the popular mainstream narrative of stranger-danger involving exploited, addicted women, accompanied by a seemingly endless supply of stereotypical stock photos of women in short skirts and 13" inch heels leaning into cars on cold, dark streets, and you've never gotten to know an actual sex worker, then I can see why my tears might not make sense to you. You probably tell yourself I'm sad at what I've become, at what I've reduced myself to. You see whore is the worst thing a woman can be, in most people's minds. But I'm not ashamed. I'm proud of myself, and I love that I was able to (briefly) pull myself out of poverty. 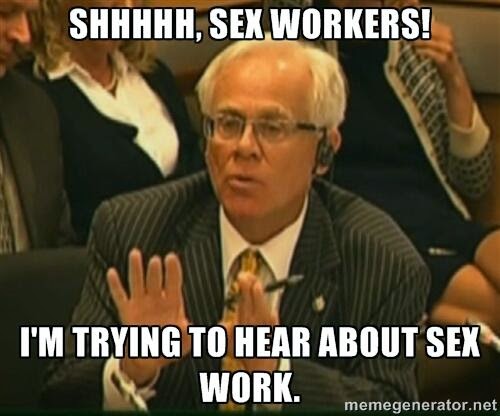 I'm angry, and afraid, and sad that controlling women's bodies and pandering to conservative voters (the core of C36) is more important to our society, government and law enforcement than the epidemics of rape, climate change, poverty, food insecurity, colonialism (the ROOT cause of harms facing Indigenous women in this country, and worldwide - which is rarely even acknowledged), racism, and domestic violence. I cry when I listen to a bunch of rich, entitled, white men (and a few women), who hold my safety, my future in their hands, discuss me as though I am an object for them to use, as though I have no agency, as though I am just a dumb, lost, fallen woman who would really rather be crucified at the alter of their moralism, if only they could make me see what's good for me. Is that not exploitation? I cry because the rage is too deep to manifest any other way.

I cry because I have several tens of thousands in student loan debts, am educated but for some reason unable to find "vanilla" work, and I can't do most types of work due to physical limitations and bodily injuries, and my one and ONLY means of survival (and only hope for one day being out of debt and poverty) is soon to be criminalized and ripped away. If you're someone like me, who is lucky enough to have low rent in a city built for millionaires, if you're someone who would likely end up homeless if evicted from their apartment (a very real danger when doing sex work from home - something I am unable to do under criminalization, even though it's safer), and who has no savings, no safety net, no insurance, no work references, the realization that in a week's time you could face legalized police harassment, arrest, eviction, and homelessness is crushing. It feels like there's a mountain on my shoulders. There is no alternative for me. No first and last month's rent. No money for movers. No money for hotel rooms. No hope. For someone like me, who is already in a niche (bbw) market, soon to be crossing into another niche (milf/mature), who everyone is quick to say "won't be targeted" by police, I cry because I simply can't afford to take that chance. I cry because I have no idea what I'm going to do, but most importantly, I cry because sex work is what I feel I was meant to do at this juncture in my life. I love it. I love my clients. I love what I've learned doing this work. I love the ways in which I've found, cared for, and asserted myself. It is where I found community, strength, power, self-confidence. At least they can't take the latter away from me. I guess that's something.